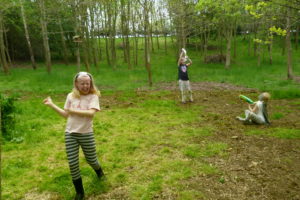 We play many “Got Ya’ Games” at AiC usually with a cardboard sword, a two-hand-touch or a puffy-tipped arrow. By and large we stay away from gunplay for reasons that have more to do with safety and sensitivity in public spaces than any philosophical opposition. At AiC we have always engaged kids’ desires for what we call “Got Ya’ Games” as we have with our own kids at home. The testimony of this parent below about why she celebrated “Cops’n’Robbers” with her own children describes more eloquently than we have ever been able to about why we celebrate such play.

“Nobody ever told me not to play guns. But, when I was a kid, and the gang played cops’n’robbers, I had a problem because I couldn’t “die.” Some kid would shoot me, and I would want to fall down and die, but somehow I couldn’t, and I would just stand there and look dazed. And if I shot somebody, he would just ignore me because he knew I had not really killed him. After I grew up and had kids of my own, and they had taught me how to play cops’n’robbers, I realized that I had been a very schizoid child, very uptight, totally lacking in spontaneity, frozen out of the NOW—and playing guns is a kid’s way of getting really “with” other kids and into a very fast-moving, action-packed present.

My observation (of about 15 years watching such games) is that only very free-spirited kids can play a really good game of cops’n’robbers… I don’t think “playing guns” usually has anything to do with guns, violence, hostility, or cruelty; it is a game of awareness. Feelings, other than joy, get in the way of awareness, and you can explode your feelings by experiencing the sound of the cap exploding in a cap pistol, for instance.

In playing guns, I believe it goes like this: If I am aware of you first, I can shoot you, and you have to die! If I get surprised by you, then I KNOW you are more aware than I am because you surprised me, so I’ve got to die. I just give up all awareness (falling in the process) until I feel a surge inside me that says I’m ready to be born again—MORE alive than before! Sometimes you and I catch each other at exactly the same time, and then we have to battle it out—Bang! Bang! Pow! Pow! I got YOU! NO you didn’t, I got you FIRST!—until we both know that one of us has bested the other. One of us must die and be born again! If, instead, one of us gets MAD—then the game quickly ends. Oh, I love a good, noisy game of cops’n’robbers! I am an old fossil of almost forty who couldn’t play guns now to save my soul, but at least I still remember that I learned something from some kids a long time ago.

I’m trying to tell you something that can only be experienced, which tells me that I’m a fool. So, my suggestion is that you find a free-spirited kid (maybe you have one in your home?) and see what you can learn from them. I believe that it’s best to learn to look at the spirit—the feelings expressed—in what your child does, and see through the material object. After all, a child can express their feelings of cruelty and hostility when they pets the dog, and they can express their joy and delight when they shoot their gun. If your child is a joyful child and they WANT a gun, I think you can trust in their joy because the things of this world are perishable, but the things of the spirit are everlasting, and I, personally, think kids are born knowing this.”

abridged from John Holt’s Teach Your Own